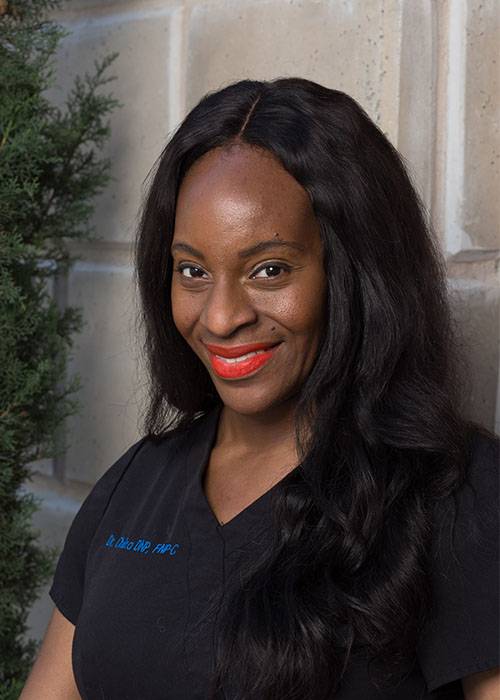 Chika Ndukwe grew up in Garland, Texas. From a young age, she grew to love the field of medicine. Her father was a pharmacist and mother a registered nurse. Her mother retired from Parkland Memorial Hospital in 2009 after 27 years of services as an associate unit manager in the newborn nursery. A love for pediatrics began when she would accompany her mother to work for Take your daughter to work day.  From that point on she knew that she wanted a career in the medical field.

After completing her first degree from the University of Houston with a bachelors in public health, she went on to pursue her bachelors in nursing from Southwestern Adventist University and graduated in 2011. In nursing school by far, her favorite clinical rotation was pediatrics. Her final summer in nursing school she was chosen to be an intern at Children’s Medical Center in the neurology department.  She wanted to continue to increase her knowledge base in pediatrics and chose to do her specialty rotation, the last semester of nursing school, in the pediatric intensive care unit at Cooks Children’s Hospital. She grew to love pediatrics and knew that she wanted to continue her career in that specialty.

After graduating with her Bachelors in Nursing, she took a job in the newborn nursery at Parkland Memorial Hospital, where her love for pediatrics blossomed.  As a registered nurse on the floor, Chika was not satisfied. She wanted to be an intricate part of her patient’s treatment team, alleviate some of their health concerns and most importantly build long-lasting relationships with her patients. This passion propelled her to continue her education to become a nurse practitioner.

Chika obtained her Doctorate in Nursing Practice specializing as a Family Nurse Practitioner from Loyola University, New Orleans in 2016.  After graduation, she got a job in neurology, where she developed a special interest in the behavioral health aspect of medicine. During her maternity leave with her second child in 2017, she realized that she had a passion for lactation support and education. She started a lactation blog and business, Dr. Breast friend PLLC when she was on maternity leave.

She learned a lot during her time in Neurology but felt like it was not the best fit. She had a love for lactation and pediatrics that would not go away. When the opportunity to join Shine Pediatrics came, she knew it was God. She believes that her love for pediatrics and fate brought her back to her roots. She is excited to be a part of Shine Pediatrics and believes in what they do. Since her two children were born into the practice, she can attest to their philosophy, and holistic approach and knows first-hand the multitude of benefits. She hopes to be an intricate part of the treatment team at Shine pediatrics.

Chika resides in Frisco, Texas with her wonderful husband and beautiful young daughters Zoey and Adalyn. In her spare time, she enjoys hosting Bible studies, spending time with family, reading and hanging out with friends.