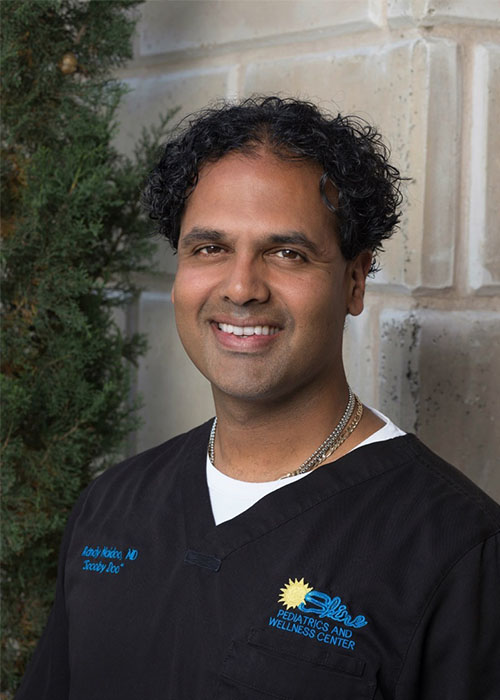 Dr. Naidoo wishes that his bio was short, but that would be a disservice to all that have helped him along the way. His parents made the journey from South Africa in 1971 to create more opportunities for themselves at the time and for their children later. His mother chose Dallas instead of Toronto.

Born at Presby Dallas in 1976, Dr. Naidoo has seen the Dallas-Fort Worth area change from primarily a big city with several suburban and rural communities to a major suburban metropolis that has connected much of Dallas and Fort Worth to make it a population of millions where boundaries are no longer a concern.

His love for sports took him to the University of Miami in Florida to walk-on and play three years of football under Coach Butch Davis and his position coach Chuck Pagano, now head coach of the Indianapolis Colts.

His passion for children was magnified at Miami with youth football clinics, Boys and Girls Club volunteering, and being a kid himself. With a Biomedical Engineering degree, he listened to his mother’s consideration to become a doctor. He remembers spending nights at Presbyterian Dallas when his father was out of town and his mother worked nights as a nurse. With thoughts of Medicine, Dr. Naidoo took the MCAT and fortunately, did well.

He chose UT Houston Health Sciences so he could be close to Sammy, his girlfriend from high school and college who attended the University of Houston Optometry School. She became his wife after the first year of professional school. On entrance to medical school, pediatrics was his only thought. While his peers tried to figure out their futures during 4th year, he took electives in all pediatric specialties. His residency was completed at Children’s Medical Center Dallas. He was chosen to become chief resident, but had to serve his active duty commitment to the Air Force for the Health Professions Scholarship.

Serving four years at Dyess Air Force Base as the sole Pediatrician and being responsible for several other areas of the base clinic provided him with experience he would never have obtained in a traditional pediatric practice. This period of time allowed for independent research and ability to hone in on the kind of pediatrician he wanted to represent. His focus was behavior and parenting. He also developed his skill set as an Allergy Extender for adults and children along with a passion for educating childhood educators about neurodevelopment.

After completing his commitment, Dr. Naidoo joined Healthy Kids Pediatrics and enjoyed every moment to practice medicine freely under the direction of Deborah Bain, M.D. His continued progress in Complementary Medicine with Board Certification by the American Board of Integrative and Holistic Medicine provided him with more exposure to other MDs with a holistic approach. Dr. Naidoo believes that the art of medicine is constant education, collaboration with other specialties, and never assuming that the truth has been obtained regarding allopathic treatments as we have seen such vast changes in medicine in the span of just a few years.

Something to remember now in the era of information technology is that our parents have access to just as much information as we have in medical school and residency. Our training and years of experience is the only edge that we have on our parents regarding disease and health. In some instances, a parent may have more knowledge than I in a particular subject matter due to the immersion that parent has taken into their child’s health. It is humbling to say, “yes, mom or dad, you are correct. I am wrong.”

So with that being said, Dr. Naidoo looks forward to the journey ahead to create a community of children who will have the individual care they need to be the most vibrant children they were created to be.

Thank you to many: my parents, my siblings, my wife and three kids, my mother and father-in-law, to several coaches, friends and family that kept me on the straight and narrow to eventually start a pediatric practice.